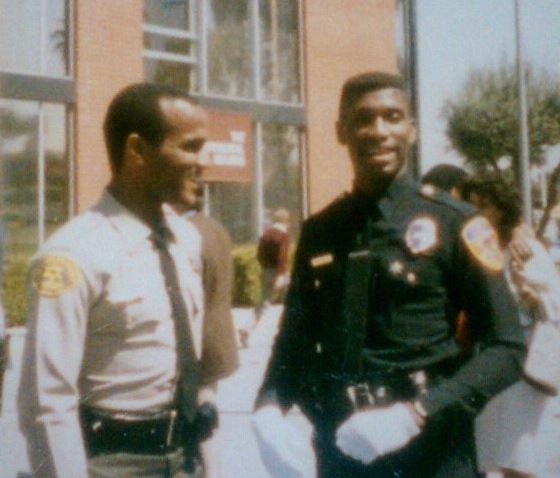 In 1984, Brian Hill was the first Black peace officer hired by Downey Police Department. He was a member of LASD Academy Class #225. Some of his classmates were Sonia Carroll, Victor Clay, and the late James Beamon. When he was a trainee and working early morning shift, he responded to a call with his training officer. He knocked on the door to speak to the informant. The informant did not see his partner because he was standing off to the side. She refused to open the door for Brian: Her words were, “Downey does not have any Negro officers.” His training officer immediately stepped into her view and said, “Brian lets go, she can wait for a White officer on dayshift.” She attempted to apologize as they walked away.

In 1987, Brian was one of the youngest detectives ever at Downey Police Department: He was 26 years old and assigned to the gang detail. Brian said, “It was quite the experience being the only Black in DB at such a young age. Back then, there was no such thing as a Hostile Work Environment or Policy of Equality, so I heard and saw some things.” Brian recalled detaining a male Black robbery suspect, when a rather high-ranking member of the department said, “Hey Brian, interview him, talk some JIVE and get him to talk.” Brian was 160 pounds soaking wet, wearing an expensive suit, a UCLA tie, wing-tip shoes, and glasses. Brian responded by simply saying, “Chief, I don’t think so.”

Brian lateralled to LASD on January 31, 1990 for more opportunities. During his exit interview with Downey PD, the chief asked him, “Why are you leaving?” Brian told him he wanted to work Special Enforcement Bureau (SEB), Recruit Training Unit (RTU), Weapons Training, and Aero Bureau, or at least have the opportunity to work in those units. Downey PD didn’t offer any of those positions at that time. The chief scoffed at him and told Brian he would not get a chance to work any of those positions for at least 10 years.

When Brian lateralled to LASD, he worked custody for a year, and transferred to Lennox Station in February of 1991. Rafer Owens and Brian were trainees together. After getting off training, Brian worked Lawndale where he was deputy of the year in 1992. He received a Senate Resolution for his work in Lawndale where he worked as a school deputy, bike team deputy, and he received a Commendable Restraint accommodation for intervening in a school shooting when Brian detained the suspect and recovered a pistol. Brian became a training officer at Lennox in 1993, and was later selected for the academy staff in 1994. As an academy staff member, Brian trained deputies, custody assistants and safety police officers through 1998. In 1998, Brian was selected to work at Weapons Training, where he believes he was the first Black deputy to work there. He was assigned to Wayside and BC Ranges. Looks like the chief from Downey was wrong.

In 1999, Brian went back to patrol and worked at Century Station on the line and on the bike team. Compton Station opened in the year 2000, and Brian went to Compton as a night detective, and later was selected as the operations deputy. In 2002, He was selected as a tactical flight deputy at Aero Bureau. He was only the 2nd Black to work Aero Bureau, and was trained by his mentor and friend, the late Tony Pachot, who was the 1st Black to work Aero Bureau. Brian was a tactical flight deputy assigned to patrol, and he also worked surveillance in a fixed-wing aircraft. He intended to remain at Aero until he made pilot. He turned down opportunities to promote to sergeant twice. He only opted to promote after the commander and captain of Aero Bureau told him he would be selected to come back to Aero after he worked a year of patrol as a sergeant. They both retired prior to Brian’s year of patrol. Brian spent 14 years attempting to get back to Aero. Aero Bureau has not had a Black tactical flight deputy or pilot since Brian promoted and Tony retired…

Brian promoted to sergeant in 2004. Since 2004 he has been assigned to TST, Lennox, COPS Bureau (Compton Gang Homicide Task Force), Lennox SIT, Reserve Forces Bureau, Weapons Training (first Black sergeant), Sheriff’s Security Detail-Sheriff McDonnell’s Team Leader, back to Weapon’s Training, and his final stop is on the island at Avalon Station. Sergeant Brian Hill was the first Black assigned to Avalon Station in 2019. He will retire in September 2020 with 36-years of law enforcement experience and service.

When asked to comment about his law enforcement career, Sergeant Hill said, “I have had a great career and I am glad I chose law enforcement. I was able to work the specialized units because I always had someone in my corner. I asked what steps I needed to take in a realistic timetable to attain my goals. I had tons of Black mentors along the way. I have had lots of mentors and sought lots of advice throughout my career. Quite a few Black deputies, sergeants, and ranks through undersheriff have been my friends and mentors. They have paved the way for me.”

To conclude this profound tribute to Sergeant Hill, we asked him to provide a personal quote to carry along with us through our law enforcement career and our personal lives. This is what Sergeant Hill offered,

“We took an oath, to serve the County of Los Angeles against all foreign and domestic enemies. Ninety-Nine percent of the people we encounter in places like Compton, Willowbrook, Vermont, or Altadena are not the enemy. They are our family, friends, or neighbors. Remember that in your day to day interaction with the public. We are them.”

On behalf of the Black Peace Officers Association, thank you for being the Pathfinder you are Brian. Today we honor and salute, Sergeant Brian Hill.